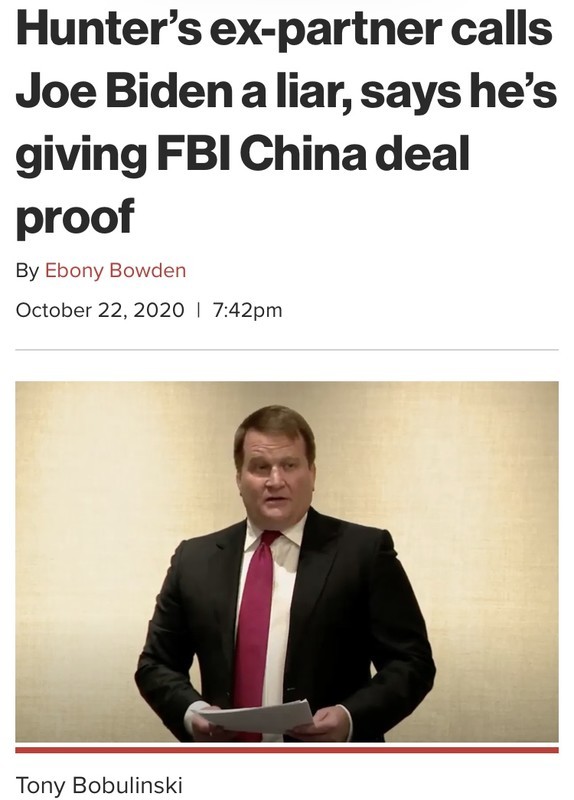 “I have heard Joe Biden say he has never discussed his dealings with Hunter. That is false. I have firsthand knowledge about this because I directly dealt with the Biden family, including Joe Biden,” Bobulinski said following The Post’s bombshell reporting on Hunter Biden’s private emails.

Bobulinski, who will be a guest of Trump’s at the debate, showed three phones spanning 2015 to 2018 as evidence and said he would be meeting with the Senate and the FBI to hand over electronics.

The US Navy veteran said he was introduced to the former veep in May 2, 2017 by Hunter Biden and the lawmaker’s brother Jim Biden before the Milken Conference.

“That night, we discussed the Biden’s history, the Biden family’s plans with the Chinese, with which he was plainly familiar, at least at a high level,” he said in Memphis, Tenn., ahead of the final debate between President Trump and Biden.

“I have no wish to bury anyone. I’ve never been political. The few contributions I have made have been to Democrats. But what I am is a patriot and my business reputation,” he said.

The US Navy veteran accused former vice president Joe Biden of being directly involved in a plot to make millions of dollars, identifying to him as “the big guy” named in the May 13, 2017 email.

That email showed the four partners each getting 20 percent shares in the business, with 10 percent going to “Jim” and the remaining 10 percent “held by H for the big guy?”

Bobulinski also released hundreds of damning text messages and emails from his time as CEO of the company being formed between the Biden family and China’s largest private energy company, named SinoHawk Holdings.

In one message sent on May 20, 2017 by a fellow SinoHawk partner, Bobulinski was warned not to mention the Democratic nominee’s involvement in the SinoHawk deal.

“Don’t mention Joe being involved, it’s only when u [sic] are face to face, I know u [sic] know that but they are paranoid,” a screenshot of the message read.

Biden and wife Jill Biden have both dismissed the reporting as a smear campaign, as has the Biden campaign.